The Romance of Writing

As a teenager I devoured Mills & Boon Romance novels. My mother read them, too, and while our tastes differed somewhat, I read nearly as many as she did. I loved stories set in Africa: those tales of sundowners on the veranda, lounging around in cane chairs and going to "the club" for tennis or cocktail parties and the hero in tropical whites (although I can't recall ever reading what the man of the moment was dressed in). Money never seemed to be an object, either.  I thought it was the ultimate in glamour and romance. To be fair, some of my interest was in learning about the jungle and the wild animals that inhabit it but for the most part it was boy meets girl, obstacles arise to keep them apart and they get together about two or three pages from the end - all under a tropical sun. Perfect!

I wrote my first Romance novel about two and a half years ago. Love at a Later Date is for mature readers. The idea came to me when I overheard two grandmothers complaining about having to look after their grandchildren all the time. They would have liked more time to themselves, they said. It got me thinking about grandmothers in general - I am one myself. Nowadays grandmothers are a young-at-heart bunch who like to enjoy themselves after raising their own families. Why shouldn't they fall in love, start a new career and live life to the full if that is what they want? And then I wondered what their families would think.  Thus the idea for Love at a Later Date was born.  I enjoyed writing it.  As a writer you often have to struggle with the blank page, the "what should happen next" syndrome as I call it. But Love at a Later Date just flowed along and I had to make very few changes to the manuscript - I always do between five to ten edits on my work.
I hope the fun I had writing it shows through. I chose a bright cover with yellow flowers to mirror the feel of the novel.
It is available as an Amazon Kindle ebook. 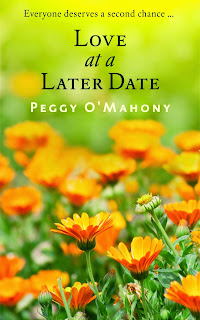 Email ThisBlogThis!Share to TwitterShare to FacebookShare to Pinterest
Labels: fun to write, grandmothers, Love at a later date, romance