I have been away in Holland on holidays at the beginning of the month. Before I left, I told myself I would not start re-writing my novel until I returned home. I have now been back over two weeks and still have not got round to it.
Writing is a habit. Every morning I get up and work on a novel. Or so it has been up until now. Yes, there are always days when I don't get round to it but they are few and far between. I do believe I am addicted to writing and suffer withdrawal symptoms if I am not working on something.
Thus, I have been plaguing myself for not doing anything these past few weeks. I have, in fact, talked myself into a guilty conscience.
Today, I resolved to get down to revising the first chapter of this novel tomorrow. I originally titled it FREEFALL but there are a number of novels with this name out there and someone once told me that it could be classified under ''hobbies - parachuting''.  It is a thriller and although I hope it will keep readers on their toes, it has nothing to do with choosing a hobby.
I know that when I get started, I have a lot of work to do because although the original manuscript got some positive criticism, it does need a lot of work. But that is the writing life. You have an idea, you write up your first draft, read it over, make changes, come up with the second draft and so it goes. Like most writers, I am never one hundred percent satisfied. I usually work on as many as ten drafts of any novel until I feel I have got it right. This can mean deleting thousands of words. But it is all fun and that feeling when the words flow, can't be beaten.

What am I doing tonight? Well, now that you ask, I'm going to curl up for an early night and finish reading Jane Austen's Sense and Sensibility. I love that feel-good effect her novels produce and when I finish reading one of them, I often take a break from picking up another book to read. Looks like I'll be back on track with my writing.
In the meantime, my Christmas novella is available in paperback on Amazon and will be available as a Kindle in mid-November which proves I have done some work this year. Here's the cover. See what you think. 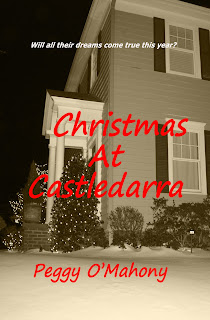