I started my first Sergeant Alan Murray Mystery novel Death in a Lonely Place several years ago following a visit to Killarney in Co. Kerry. 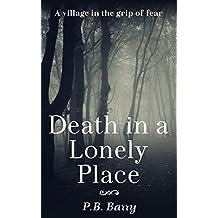 I remember standing on the side of a steep hill and looking down at the lakes below and thinking that this would be a good place to hide a body. The wildness of the mountains - that great mass of land towering above us - intrigued me. And so Sergeant Alan Murray was created.
I invented the village of Ballyamber where he lives and I reckoned that his wife went missing on a climbing trip on one of those majestic mountains several years before my story began. I had no idea what had happened to her, I only knew that she disappeared without trace.
Next, I started to write a novel about a woman who went missing in the area and from there the story took over. Other characters appeared from nowhere, or so it seemed:  the gossipy Mrs. Quinn, timid Helen looking to start a new life and her domineering boss Amy, Major Johnson and his wife Kim. My special favourite is Murray's assistant, Jim Flynn who is young and motivated and does not have too much patience with how some of the investigation is going. They all crowded into the story with their own joys and sorrows.
In the background is the mountain - fictitious - call Ardnabrone which is reputed to claim three lives a year. Ardnabrone means the "hill of sorrow" and so it proves to be in all three novels in the Sergeant Alan Murray series.
Some of my readers have said "I thought I was there, right in the middle of it all". Many readers are asking when the next novel in the series will appear. The answer to that is that I do not know. I had intended Death in a Lonely Place to be a stand-alone novel but it proved so popular that I wrote the second one, Ending in Death and then I just had to find out what had happened to Alan Murray's wife and I wrote A Cold Case of Murder.
All three novels are available on Amazon as e-books and as paperbacks.
Posted by peggiesweb at 08:43