Today is stormy here by the sea. The tide is coming in with a strong south-easterly wind to fling the water against the sides of the boats. The river makes gurgling noises as it laps against its banks.  I love this kind of weather. I almost envy the seagulls who float about the sky, drifting on the wind as if they really enjoyed it. We are lucky that we don't have a full moon or a new moon as with the gale force wind coming from the south-east, this would possibly mean flooding in the lower reaches of the town. I didn't stay out too long as I am still recovering from a nasty virus which I picked up over Christmas/New Year.
It was good to get back in the warmth but no excuse for not returning to my writing. I am doing the final edit on my Sergeant Alan Murray series novel A Cold Case of Murder. Here is a preview of the cover: 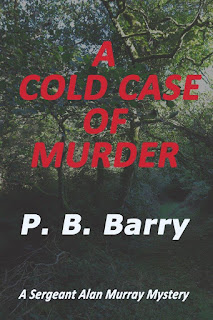 Murray's wife Sheila disappeared on Ardnabrone Mountain several years ago and despite several investigations no trace of her was ever found. When DS Lee Sheridan is assigned to revisit the case, Murray is sceptical. The locals will hardly take a city girl, a stranger, into their confidence, he feels.
But just as he has convinced himself that Lee is wasting her time, human remains are discovered on Ardnabrone Mountain. Could this be the lead they have all been looking for?

I have edited and re-edited the story countless times. Some famous author once said that writing is re-writing and I am inclined to agree. But it is a labour of love.  I am sitting here in the spare bedroom which I use as my office. Outside my window I can see the river, swelled now by the incoming tide and I can hear the wind whistling through the street. Time to get back to work!