I'm just back from Germany where I had some quality time with my daughter and two grandchildren. We spent a week in a holiday park in the Eifel.  There is an extinct volcano here and the country is rich in thickly wooded forests and deep valleys.  It is very pastoral.  Here's an impression from my not-very-technical camera: 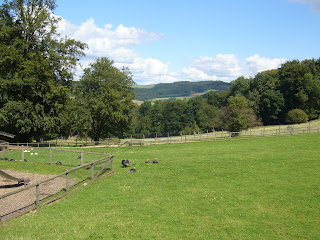 This was taken at a small wildlife park and those dots you can see are in fact big fat turkeys.  There were goats as well - loads of them - who came up to the enclosure looking for snacks (which you could buy from the shop, all healthy stuff).

We visited a falconry and watched the eagles, kestrels and owls being fed and learned a bit about them.  We drove through another park and had to negotiate scores of deer and wild pigs and a few donkeys as well.
Here's a picture of the falconry but as usual I missed the action bit where the eagles were taking off but maybe you get a feel for the atmosphere? 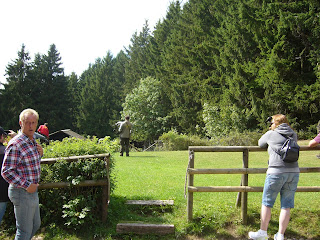 There were some lovely picturesque towns in the neighbourhood.  My favourite was Bad Muenstereifel where we spent the best part of a day.  It is a walled town and the old part - overlooked by a castle which  appears to be a restaurant nowadays -  is a pedestrian zone. It was a very hot day.  We sat next to this little stream and had our lunch.  The castle can just be seen at the top of the picture. 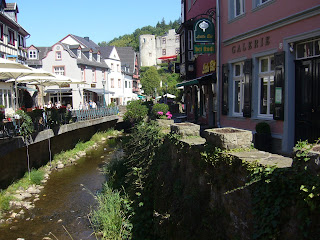 Here's another shot of the town. 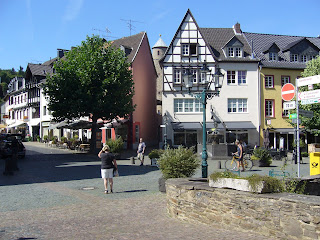 All in all it was a very enjoyable week.  Ladal Holiday Park is Dutch-owned.  It is situated on the border of Luxembourg and Belgium so had a real international flair.  Very comfortable accommodation and very efficiently run with plenty for the kids to do.

Now I am back to grey reality - literally.  Today it is raining, it rained yesterday, and it is slowly getting chilly.  Which all means that I will not put my nose outside the door today.  Instead I will knuckle down to writing the second novel in my Sergeant Alan Murray crime series.  I'm about halfway through the first draft - in other words there is a load of work to be done.  I usually revise about five times before I feel I can publish.  If you like a cozy crime novel to while away the evenings, you could try the first novel in the series:  Death in a lonely Place:  Here's the U.S. link http://www.amazon.com/Death-Lonely-Place-P-B-Barry-ebook/dp/B00LSP1I2U  and the Amazon UK one:  http://www.amazon.co.uk/gp/product/B00LSP1I2U/
I write under the pen name P.B. Barry to distinguish from my other novels.

I'm off to make a cup of tea and then I really will get down to some writing.  I'll just have another look at my not-quite-perfect holidays pictures first, just to remind myself that two short weeks ago I was sweating in a hot sun with a blue sky overhead in the company of my daughter and two very lively grandkids.  Ahhh!
Posted by peggiesweb at 02:59